Conditions on earth during Peter’s time – as our baseline, for our understanding

I am not in agreement with noted theologian John Walvoord’s position regarding several key doctrines (once-saved-always-saved, dispensationalism, church rapture timing, etc.). Nonetheless, I greatly respect and honor this learned man of God and truly appreciate all the good that he contributed to the Kingdom during his productive lifetime. His writings bless me. What we disagree on challenges me. What he teaches grows me.

Below is a portion of his succinct introduction to the book of 1 Peter. And here’s a picture of a sculpt of Peter: 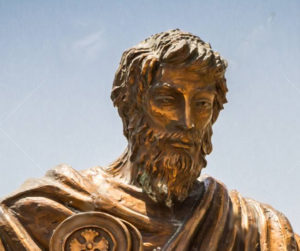 Included in Walvoord’s intended purpose to frame the history of this mighty epistle, notable and not to be missed by us are the conditions encountered by the believers in century #1 of the church.

Spiritually things have not really improved on earth (although Western church has enjoyed somewhat of a temporary “peace-bubble” pretty much since the Renaissance).

We are told, including by our Lord Himself, that the conclusion of this age will present the most escalated troubles, ever. This blog, and Walvoord’s writing, are written to freak anyone out but rather to prepare us to prepare ourselves, in Him, so that we might not be shaken.

Matthew 24:21-31
21 For then there will be great tribulation, such as has not been since the beginning of the world until this time, no, nor ever shall be. (and see Daniel 12:1)
22 And unless those days were shortened, no flesh would be saved; but for the elect’s sake those days will be shortened.

…27 For as the lightning comes from the east and flashes to the west, so also will the coming of the Son of Man be.
28 For wherever the carcass is, there the eagles will be gathered together.
29 “Immediately (“immediately” leaves no room to insert 2,000 years between the most troubling days ever, and the Lord’s dramatic return, as some popular doctrines would require) after the tribulation of those days the sun will be darkened, and the moon will not give its light; the stars will fall from heaven, and the powers of the heavens will be shaken.
30 Then the sign of the Son of Man will appear in heaven, and then all the tribes of the earth will mourn, and they will see the Son of Man coming on the clouds of heaven with power and great glory.
31 And He will send His angels with a great sound of a trumpet, and they will gather together His elect from the four winds, from one end of heaven to the other.

And now here’s John Walvoord depicting Christian living, troubles, challenges and struggles in an increasingly darker world environment. This is history that allows us to see clearly both in the present times, and also forward to our Lord’s glorious return. World news affirms the current conditions of percolating troubles and an orchestrated global assault against righteousness.

‘Peter wrote this epistle apparently just before or shortly after the beginning of Nero’s persecution of the church in a.d. 64. Since Peter referred to the government as still functioning (an institution which commends those who do right and punishes those who do wrong; 2:13-14), some believe that the church was not yet facing an organized Roman persecution. Evidently repressive laws had not yet been enacted specifically against Christians. It was still possible for Peter’s readers to “honor the king” (2:17). The persecution and suffering that Peter did refer to was primarily social and religious rather than legal. A hostile pagan society would slander, ridicule, discriminate against, and even inflict physical abuse on those whose lifestyles had radically changed because of their faith in Christ.

However, Peter seemed to indicate that greater persecution was imminent. He assured his readers (1:6) that they could rejoice though they “may have had to suffer grief in all kinds of trials.” Peter exhorted them to prepare, to be self-controlled (1:13), possibly to suffer as Christians according to God’s will (4:19). So perhaps Nero’s severe persecution had already begun in Rome and was spreading to the provinces to which Peter was writing. This would place the date of the letter in late a.d. 64 or early 65.

The suggestion that the persecution had already begun in Rome also explains why Peter would refer cryptically to his location as “Babylon” (5:13). Peter was in Rome during the last decade of his life. His martyrdom is dated about a.d. 67. At the time of the writing of 1 Peter he was not in the custody of the Roman officials, and evidently wished to conceal his true location. (Other scholars, however, say that Peter was in the literal city of Babylon, where a Jewish community then flourished.)’

TAKEAWAY?
Ephesians 6:13
13 Therefore take up the whole armor of God, that you may be able to withstand in the evil day, and having done all, to stand.

I am a believer in Jesus - that He is the One and Only Messiah of the world. I believe the Bible is the perfect and complete Word of God, and that God is absolutely competent and capable of keeping His Word perfect, undefiled, and uncorrupted. Jesus was born Jewish. So was I. He lived a perfect life, and is worshiped. I live an imperfect life, and I worship Him.
View all posts by ez3728 →
This entry was posted in Anointing, Apocalypse, End Times Related, Everything, God's Word, New Testament, Prophecy, Prophets, Suffering, Testing, Timing, Tribulation, Understanding & Knowing God, Word Of God. Bookmark the permalink.