God’s promise to Abraham, His friend, forever. Including now.

The first decade (maybe two) of my own salvation, this former living-in-abject-darkeness Jewish hippie pretty much considered himself a Christian, someone who had been saved, redeemed, delivered by Jesus Christ. And all that is true and remains true. My being Jewish was sort of regarded, by me, as what I had been born into, but now I was moving on to Christianity.

Meanwhile, as I pressed into learning the word of the Lord (and learning from the Lord), it became more and more apparent that my own “Jewish-thing” wasn’t simply a family culture or bloodline, and that the biblical story of the “Jewish-thing” was not simply overwritten by a savior with a Greek name: Jesus Christ.

And it runs way deeper than that. The roots of our Christian faith are addressed throughout the New Testament. A solid read is this excerpt by Rabbi Paul to the Romans:

13 For I speak to you Gentiles; inasmuch as I am an apostle to the Gentiles, I magnify my ministry,

14 if by any means I may provoke to jealousy those who are my flesh and save some of them. 15 For if their being cast away is the reconciling of the world, what will their acceptance be but life from the dead?

16 For if the firstfruit is holy, the lump is also holy; and if the root is holy, so are the branches.

17 And if some of the branches were broken off, and you, being a wild olive tree, were grafted in among them, and with them became a partaker of the root and fatness of the olive tree,

18 do not boast against the branches. But if you do boast, remember that you do not support the root, but the root supports you.

19 You will say then, “Branches were broken off that I might be grafted in.”

20 Well said. Because of unbelief they were broken off, and you stand by faith. Do not be haughty, but fear.

21 For if God did not spare the natural branches, He may not spare you either.

22 Therefore consider the goodness and severity of God: on those who fell, severity; but toward you, goodness, if you continue in His goodness. Otherwise you also will be cut off.

23 And they also, if they do not continue in unbelief, will be grafted in, for God is able to graft them in again.

24 For if you were cut out of the olive tree which is wild by nature, and were grafted contrary to nature into a cultivated olive tree, how much more will these, who are natural branches, be grafted into their own olive tree?

25 For I do not desire, brethren, that you should be ignorant of this mystery, lest you should be wise in your own opinion, that blindness in part has happened to Israel until the fullness of the Gentiles has come in.

26 And so all Israel will be saved, as it is written:

“The Deliverer will come out of Zion,

And He will turn away ungodliness from Jacob; 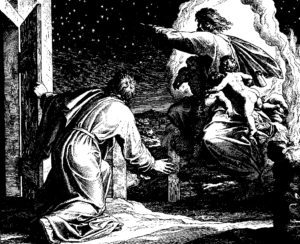 SOMETHING CRITICAL FOR US ALL: Abraham has a God-encounter and receives a promise from the Creator of the universe – I’ve written about this before but it’s timely to mention this again:

Genesis 12:3 (the LORD speaking to Abraham):

3 “I will bless those who bless you,

And I will curse him who curses you;

And in you all the families of the earth shall be blessed.”

That verse is sadly not given justice by “I will bless those who bless you and I will curse those who curse you”. The Hebrew establishes a higher bar of accountability for the “those”.

The Hebrew actually says:
I will BARUCH those who BARUCH you;

And I will ARAR those who QALAL you”

But looking at line two anyone can see that the original text presents takes the false liberty to present two distinct words as “curse”.

WORD ONE: “ARAR” means “CURSE”. (FYI: When the ark safely landed after the destruction of the world by a flood, the CURSE was REVERSED. It was a start-over initiated for society, by God, by way of global judgment. Noah named the mountain “CURSE-REVERSED”. ARARAT.)

WORD TWO: “QALAL” means to brush-off, to treat lightly – basically saying failure to treat something as critically important as it may be.

God was promising His friend (Isa 41:8) Abraham that the bar by which Abraham’s descendants were to be acknowledged and treated was WAY HIGHER than not simply not cursing them. In essence the Lord was warning the world (particularly, I believe, those who would be reading the words of scripture) that failure to regard the Jewish people and even the Jewish state –  even during their 2,000 year season of partial blindness – will result in a curse. Just sayin’.

The prophetic plan of the upcoming times deserves and in fact demans our understanding of both the heart of God and the plans of God, so that we might be effective in His will.

1 The burden of the word of the LORD against Israel. Thus says the LORD, who stretches out the heavens, lays the foundation of the earth, and forms the spirit of man within him:

2 “Behold, I will make Jerusalem a cup of drunkenness to all the surrounding peoples, when they lay siege against Judah and Jerusalem.

3 And it shall happen in that day that I will make Jerusalem a very heavy stone for all peoples; all who would heave it away will surely be cut in pieces, though all nations of the earth are gathered against it.

And here’s truth worth listening to, from a man who loves God and loves Israel. It’s my understanding this was recorded 11 May 2021.

Pray for Israel, saints. Pray for safety for the innocents. Pray that their eyes are opened to the desperate need for their one and only Savior Y’Shua/Jesus. Pray for the praying saints who are in Israel at this time. I spoke with a family today. They are pressing in to the Lord, knowing these are the days of harvest as well as days of troubles and shakings.

I am a believer in Jesus - that He is the One and Only Messiah of the world. I believe the Bible is the perfect and complete Word of God, and that God is absolutely competent and capable of keeping His Word perfect, undefiled, and uncorrupted. Jesus was born Jewish. So was I. He lived a perfect life, and is worshiped. I live an imperfect life, and I worship Him.
View all posts by ez3728 →
This entry was posted in Apocalypse, Blessed, End Times Related, Everything, Fear of the Lord, God's Word, Israel, Jesus, New Testament, Timing, Tribulation, Understanding & Knowing God, Word Of God. Bookmark the permalink.