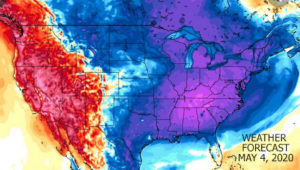 TITLE NOT A TYPO: I purposely used WEATHER as opposed to WHETHER in the title of this writing, as it pertains to our country, our time, and our God. Quippy.

COVERED BEFORE: A good deal of this topic has been covered before in this blog.
COVERED BEFORE: The critical 400th anniversary of our nation’s first covenant, before our crashing into the year 2020, covered before (likely-manufactured) corona-virus, sheltering in place and governmental over-extension “for our safety”, before armed protests in state capitals, required registering of church-goers in Kansas, church closures while abortion clinics remain open, arrests of people congregating, the escalating troubles worldwide, accusations and exposures of corruption and highest-level conspiracies throughout our land and our world, daily-increasing threats of war and global economic collapse. Covered before, but good to cover now as a reminder, lest we get caught up in the noise and the waves and overlook our call on earth, as the people of God, now.

The God of heaven and earth is not restricted to a “still, small voice” although that is often how He may choose to speak. It’s actually quite polite and supernaturally gentle, and is intended to take us to the place of seeking Him out, quieting things down around us, to hear Him. Excellent. I love it when I am personally in that place. But there’s other places, other times, other voices of the same one and only God.

THAT SAID – let’s particularly recognize that we, America, are indeed a covenant nation, our first covenant being 1620 (happy exact 400th anniversary). The Mayflower Compact. Something to read from this site, posted Sept 16, 2018:
https://ez3728.com/?p=1154

God, via the prophet Amos (as well as elsewhere) has kindly modeled to us how He desires intimacy with covenant people – compatibility through holiness:
Amos 3:
3 Can two walk together, unless they are agreed?

So let’s consider all of Amos 3 and 4 – it’s a blast of revelation as to who God is and how He will escalate the conversation until someone may listen and respond:
Amos 3:1 – 4:13
1 Hear this word that the LORD has spoken against you, O children of Israel, against the whole family which I brought up from the land of Egypt, saying:
(HERE’S THE SPECIALNESS OF COVENANT, INTIMATE “KNOWING”)
2 “You only have I known of all the families of the earth;
(AND THE ACCOMPANYING ACCOUNTABILITY OF BEING COVENANT-KNOWN)
Therefore I will punish you for all your iniquities.”
(V3 NOW MAKES GOOD SENSE – HE’S HOLY AND REQUIRES US HOLY TO WALK IN INTIMACY)
3 Can two walk together, unless they are agreed?
(NOTHING, ZERO, “JUST HAPPENS” – SO ESPECIALLY DO NOT IGNORE ANY OF GOD’S ACTIVITY)
4 Will a lion roar in the forest, when he has no prey?
Will a young lion cry out of his den, if he has caught nothing?
5 Will a bird fall into a snare on the earth, where there is no trap for it?
Will a snare spring up from the earth, if it has caught nothing at all?
6 If a trumpet is blown in a city, will not the people be afraid?
If there is calamity in a city, will not the LORD have done it?
7 Surely the Lord GOD does nothing,
Unless He reveals His secret to His servants the prophets.
8 A lion has roared!
Who will not fear?
The Lord GOD has spoken!
Who can but prophesy?
Punishment of Israel’s Sins
9 “Proclaim in the palaces at Ashdod,
And in the palaces in the land of Egypt, and say:
‘Assemble on the mountains of Samaria;
See great tumults in her midst,
And the oppressed within her.
10 For they do not know to do right,’
Says the LORD,
‘Who store up violence and robbery in their palaces.’ ”
11 Therefore thus says the Lord GOD:
“An adversary shall be all around the land;
He shall sap your strength from you,
And your palaces shall be plundered.”
12 Thus says the LORD:
“As a shepherd takes from the mouth of a lion
Two legs or a piece of an ear,
So shall the children of Israel be taken out
Who dwell in Samaria—
In the corner of a bed and on the edge of a couch!
13 Hear and testify against the house of Jacob,”
Says the Lord GOD, the God of hosts,
14 “That in the day I punish Israel for their transgressions,
I will also visit destruction on the altars of Bethel;
And the horns of the altar shall be cut off
And fall to the ground.
15 I will destroy the winter house along with the summer house;
The houses of ivory shall perish,
And the great houses shall have an end,”
Says the LORD.

THE TROUBLES OF DISOBEDIENT COVENANT-ISRAEL ESCALATED AS THEIR DEFIANCE OF HIS CORRECTION ESCALATED:
1 Hear this word, you cows of Bashan, who are on the mountain of Samaria,
Who oppress the poor,
Who crush the needy,
Who say to your husbands, “Bring wine, let us drink!”
2 The Lord GOD has sworn by His holiness:
“Behold, the days shall come upon you
When He will take you away with fishhooks,
And your posterity with fishhooks.
3 You will go out through broken walls,
Each one straight ahead of her,
And you will be cast into Harmon,”
Says the LORD.
(EVEN THE “HOLY PLACES” DON’T WORK WHEN THE PEOPLE PLAY CHURCH, AND REMAIN UNHOLY)
4 “Come to Bethel and transgress,
At Gilgal multiply transgression;
Bring your sacrifices every morning,
Your tithes every three days.
5 Offer a sacrifice of thanksgiving with leaven,
Proclaim and announce the freewill offerings;
For this you love,
You children of Israel!”
Says the Lord GOD.
(SOME EXAMPLES AS TO HOW GOD THEREFORE DETERMINED IT NECESSARY TO SPEAK TO HIS PEOPLE, TO GET THEIR ATTENTION AND RESPONSE)
A. FAMINE
6 “Also I gave you cleanness of teeth in all your cities.
And lack of bread in all your places;
Yet you have not returned to Me,”
Says the LORD.
B. WEATHER
7 “I also withheld rain from you,
When there were still three months to the harvest.
I made it rain on one city,
I withheld rain from another city.
One part was rained upon,
And where it did not rain the part withered.
8 So two or three cities wandered to another city to drink water,
But they were not satisfied;
Yet you have not returned to Me,”
Says the LORD.
C. PESTILENCE AND PLAGUES
9 “I blasted you with blight and mildew.
When your gardens increased,
Your vineyards,
Your fig trees,
And your olive trees,
The locust devoured them;
Yet you have not returned to Me,”
Says the LORD.
10 “I sent among you a plague after the manner of Egypt;
Your young men I killed with a sword,
Along with your captive horses;
I made the stench of your camps come up into your nostrils;
Yet you have not returned to Me,”
Says the LORD.
D. DESTRUCTION FROM HEAVEN, WITH A REMNANT LEFT
11 “I overthrew some of you,
As God overthrew Sodom and Gomorrah,
And you were like a firebrand plucked from the burning;
BUT THEY STILL WOULD NOT RETURN TO HIM IN REPENTANCE
Yet you have not returned to Me,”
Says the LORD.
12 “Therefore thus will I do to you, O Israel;
Because I will do this to you,
Prepare to meet your God, O Israel!”
13 For behold,
He who forms mountains,
And creates the wind,
Who declares to man what his thought is,
And makes the morning darkness,
Who treads the high places of the earth—
The LORD God of hosts is His name.

It ought to be expected that some popular prophets likely garnered great popularity and acceptance by (falsely) proclaiming the good mood of God at times when God was clearly not in a good mood. Research: Jer 28:17, Ezek 11:13, Jer 23. Ezek 13. 1 Kings 22:5-10. Hananiah and Pelatiah don’t quite get their publishing contracts for prophetic-writing inclusions in the scriptures.

Another voice the Lord has always sought to utilize is the voice of His People.
Believers, Churches and Synagogues failing to recognize and proclaim, in love but in clarity and in the fear of the Lord, that our covenant-God is quite actively (and biblically) dealing with our nation in these days, are in large part contributing to the escalation of His voice. Our lives as living letters (“epistles” – 1 Cor 3:3) requires this much of us. We are to speak on His behalf
Ezek 3. Col 1:28.

BACK TO NOW: Making believe we are not at war with several nations right now, and ignoring the civil unrest within our country, blowing off plagues and/or denying pestilence as stuff that is “simply happening”, or failing to address the fact that we are in global economic crisis, let’s for a moment simply consider our own WEATHER PATTERNS. It is May 5, 2020:
Scorching heat in the southwest with millions forced to shelter in place.
Simultaneously there’s arctic weather, with snow and freezing, predicted for the east coast this weekend. In May.
https://www.foxnews.com/us/northeast-arctic-blast-snow-mothers-day-weekend-southwest-record-heat-weather

BUT WAIT! We’re in New Testament Times!! Without any doubt.
Is there any correlation between recorded Old Testament happenings and New Testament life? Of course there is.

1 Corinthians 10:6-11
6 Now these things became our examples, to the intent that we should not lust after evil things as they also lusted. 7 And do not become idolaters as were some of them. As it is written, “The people sat down to eat and drink, and rose up to play.”
8 Nor let us commit sexual immorality, as some of them did, and in one day twenty-three thousand fell;
9 nor let us tempt Christ, as some of them also tempted, and were destroyed by serpents;
10 nor complain, as some of them also complained, and were destroyed by the destroyer.
11 Now all these things happened to them as examples, and they were written for our admonition, upon whom the ends of the ages have come.

I am a believer in Jesus - that He is the One and Only Messiah of the world. I believe the Bible is the perfect and complete Word of God, and that God is absolutely competent and capable of keeping His Word perfect, undefiled, and uncorrupted. Jesus was born Jewish. So was I. He lived a perfect life, and is worshiped. I live an imperfect life, and I worship Him.
View all posts by ez3728 →
This entry was posted in Anointing, Apocalypse, End Times Related, Eternity, Everything, Fear of the Lord, God's Word, Holy Spirit, Movement of God, New Testament, Obedience, Old Testament, Personal Relationship, Prophecy, Prophets, Repentance, Revelation(s), Sin, Timing, Tribulation, Understanding & Knowing God, Word Of God. Bookmark the permalink.