Something bigger than any one topic in the word of God, is God Himself.
He only does marvelous things (Ps 72:8).
Follow along w me……

The captivity by Babylon was a fulfillment of harsh discipline warned by God in Deuteronomy 27-28 (the blessings and the cursings of the covenant). That captivity, among other things, spawned the recount of Nebuchadnezzar’s “Mother Of All Prophecy” Statue Dream (foreseeing the entire progression of world-rule history through Persia, Rome, all forms of hybrid govts, to the final Anti-Christ to the reign of Messiah).

Having been delivered from Egyptian bondage, the Lord calls for an altar to be built, and proclaims this to His people, Israel:

Deuteronomy 27:9-13
9 Then Moses and the priests, the Levites, spoke to all Israel, saying, “Take heed and listen, O Israel: This day you have become the people of the Lord your God.
10 Therefore you shall obey the voice of the Lord your God, and observe His commandments and His statutes which I command you today.”
11 And Moses commanded the people on the same day, saying,
12 “These shall stand on Mount Gerizim to bless the people, when you have crossed over the Jordan: Simeon, Levi, Judah, Issachar, Joseph, and Benjamin;
13 and these shall stand on Mount Ebal to curse: Reuben, Gad, Asher, Zebulun, Dan, and Naphtali. 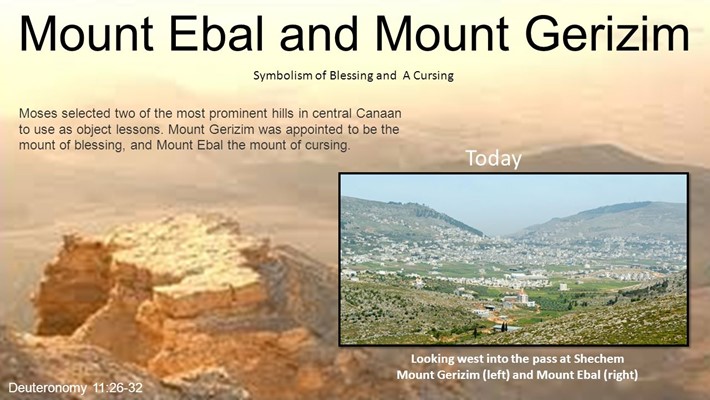 For the sake of read-time I will not go into the purpose of the names of both mountains, but let’s look at the tribal divisions as to who was told to stand at which mountain, to represent either blessing or cursing. Understand that the Lord never said entire tribes would be cursed or blessed, but lots of folks standing in front of each mountain provided a clear image that curses and blessings had to do with actual living people. Still the question is asked: Why which tribes at which mountain?

Afforded the luxury of biblical history, we can clearly see that the first group (Team-Gerizim) provided most of the major players in scriptural progress: Jesus, David, Isaiah, Jeremiah, Ezekiel, Saul/Paul, etc. This doesn’t mean that no one from Team Ebal did anything great, but we can’t help but get the point.

So why the “unlucky” designation, by God, as to who stood at which mountain, especially Team-Ebal?

Again: Team Ebal – Reuben, Gad, Asher, Zebulun, Dan, and Naphtali
Reuben – forfeited his inheritance through incest:.
Genesis 49:3-4
3 “Reuben, you are my firstborn,
My might and the beginning of my strength,
The excellency of dignity and the excellency of power.
4 Unstable as water, you shall not excel,
Because you went up to your father’s bed;
Then you defiled it—

And that leaves Zebulun.
What about Zebulun?

The root of the name Zebulun emanates from the Hebrew word for “gift” – connoting an unearned kind of thing. So why was Zebulun drafted by God onto Team-Ebal?
I am looking into this, but my first inclination is sufficient quite frankly for me.

Zebulun may well have been designated by our great God, at Ebal, into a place of “blessing-less” low-position, with the odds against them, so that the glorious and redemptive gift of God, completely unearned, might glorify Him (and encourage us) as later revealed at the cross of the One who bore the curse for “whosoever will”.

Matthew 4:13-16
13 And leaving Nazareth, He came and dwelt in Capernaum, which is by the sea, in the regions of Zebulun and Naphtali,
14 that it might be fulfilled which was spoken by Isaiah the prophet, saying:
15 “The land of Zebulun and the land of Naphtali,
By the way of the sea, beyond the Jordan,
Galilee of the Gentiles:
16 The people who sat in darkness have seen a great light,
And upon those who sat in the region and shadow of death
Light has dawned.”

Some of us might at times think we were drafted onto Team-Ebal.
We were called to inherit a blessing, and we have, and we will.
That is the plan of God, who only does marvelous things.

I am a believer in Jesus - that He is the One and Only Messiah of the world. I believe the Bible is the perfect and complete Word of God, and that God is absolutely competent and capable of keeping His Word perfect, undefiled, and uncorrupted. Jesus was born Jewish. So was I. He lived a perfect life, and is worshiped. I live an imperfect life, and I worship Him.
View all posts by ez3728 →
This entry was posted in Anointing, Blessed, Blessing, End Times Related, Everything, God's Word, Israel, Old Testament, Prophecy, Salvation, Thanksgiving, Understanding & Knowing God, Word Of God. Bookmark the permalink.