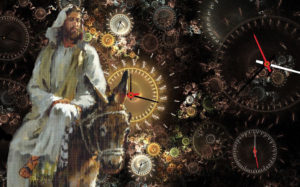 I have spoken/written/taught/studied so many times about the topics of Time and God’s Timing, I was certain I’d find good past notes to quickly post. Alas, there’s hundreds of pages of notes and writings to digitally wade through – and I did not find what I was looking for. I am of the mind the Lord desires some fresh bread, hence a new writing of topics addressed earlier, but now addressed – for the now.

As aged-Jacob leaned on his staff and pronounced the individual 12-sons blessings, his word to the tribe of Issachar contained some corrective admonishments. For our purposes, let’s focus on the “tribal logo”, “coat of arms” or “mascot” (if you will):
Genesis 49:14
14 “Issachar is a strong donkey,

FAST FORWARD to the days of anointed-David fleeing from crazed-King Saul (more on him later). God was personally calling special people to join up with David to turn the kingdom over to him. Below we can see the calling, and importantly for this writing we can learn of the Issachar tribe’s unique anointing (most critical during critical times):

THE GOD-CALLING – 1 Chronicles 12:23
23 Now these were the numbers of the divisions that were equipped for war, and came to David at Hebron to turn over the kingdom of Saul to him, according to the word of the LORD:

THE SPECIFIC ANOINTING OF ISSACHAR – 1 Chronicles 12:32
32 of the sons of Issachar who had understanding of the times, to know what Israel ought to do, their chiefs were two hundred; and all their brethren were at their command;

FAST FORWARD TO THE TIMES OF MESSIAH’S FIRST APPEARANCE
Part of Jesus’ obedience was based upon the timing of heaven
Matthew 26:18-19
18 And He said, “Go into the city to a certain man, and say to him, ‘The Teacher says, “My time is at hand; I will keep the Passover at your house with My disciples.” ’ ”
19 So the disciples did as Jesus had directed them; and they prepared the Passover.

MEANWHILE THOSE DESPISING Y’SHUA/JESUS HAD DIFFERENT PLANS and specifically did not want Jesus crucified during the Jerusalem-packed pilgrimage holiday of Passover (because it was a pilgrimage holiday and Jerusalem would therefore be filled with the greatest gathering of eye-witnesses – the crucifixion and resurrection was intended by God to go viral):
Mark 14:1-2
1 After two days it was the Passover and the Feast of Unleavened Bread. And the chief priests and the scribes sought how they might take Him by trickery and put Him to death.
2 But they said, “Not during the feast, lest there be an uproar of the people.”

THE ZECHARIAH 9 PROPHECY (IN THE JEWISH SCRIPTURES) GETS FULFILLED (check that one off) – Matthew 21:1-2
1 Now when they drew near Jerusalem, and came to Bethphage, at the Mount of Olives, then Jesus sent two disciples,
2 saying to them, “Go into the village opposite you, and immediately you will find a donkey tied, and a colt with her. Loose them and bring them to Me.

Matthew 21:4-8 (reciting the promise to the Jewish people and to all others who would believe – Zechariah 9:9):
4 All this was done that it might be fulfilled which was spoken by the prophet, saying:
5 “Tell the daughter of Zion,
‘Behold, your King is coming to you,
Lowly, and sitting on a donkey,
A colt, the foal of a donkey.’ ”
6 So the disciples went and did as Jesus commanded them.
7 They brought the donkey and the colt, laid their clothes on them, and set Him on them.
8 And a very great multitude spread their clothes on the road; others cut down branches from the trees and spread them on the road.

And our Lord rides into Jerusalem, at the perfect and God-ordained time to present Himself as the once-for-all Passover sacrifice. He is riding the tribal logo/mascot/coat of arms of the tribe of Issachar. Timing arguably may not be Everything, but it is right up there when it comes to getting things right, aligned with the clock of heaven. Co-Ordinated Incidences.

SOLOMON SAID IT THIS WAY:
Ecclesiastes 3:1
1 To everything there is a season,
A time for every purpose under heaven: ……………….
….. then Solomon proceeds to lay out a laundry-list of contradictory actions and issues to show us the right thing at the wrong time is the wrong thing.
We are called to walked in the Spirit – Spirit-led, Spirit-held-back, Spirit-obedient. It is from that place of holy communication and holy obedience that we will be successful in our God’s plans, and only that place.

BACK TO SAUL (a sad model of failure).
Saul (soon to be replaced by David) had been instructed by the prophet Samuel to wait for Samuel to arrive for a religious sacrifice. And Saul failed out of fear and decided to offer the sacrifice himself.
1 Samuel 13:8-12
8 Then he waited seven days, according to the time set by Samuel. But Samuel did not come to Gilgal; and the people were scattered from him.
9 So Saul said, “Bring a burnt offering and peace offerings here to me.” And he offered the burnt offering.
10 Now it happened, as soon as he had finished presenting the burnt offering, that Samuel came; and Saul went out to meet him, that he might greet him.
11 And Samuel said, “What have you done?”
Saul said, “When I saw that the people were scattered from me, and that you did not come within the days appointed, and that the Philistines gathered together at Michmash,
12 then I said, ‘The Philistines will now come down on me at Gilgal, and I have not made supplication to the LORD.’ Therefore I felt compelled (King James Version says “I forced myself”), and offered a burnt offering.”
13 And Samuel said to Saul, “You have done foolishly. You have not kept the commandment of the LORD your God, which He commanded you. For now the LORD would have established your kingdom over Israel forever.

ALL THAT TO SAY: The very most critical nature of the times in which we are living warrant and even demand our alignment with both the purposes and the timings of God, and by His grace and by His Spirit, in that alignment and timing we can accomplish the great exploits spoken of in the book of Daniel – written for us as one huge revelation re how the conclusion of this age unfolds. Failed King Saul did not accidentally just “slip up”. He had to force himself into disobedience. And it was disastrous.

Our Lord has us here (as uncle Mordecai told niece Esther during the Purim events chronicle) “for such a time as this”. God’s grace was, is, always will be sufficient. He promises to pour out His Spirit in these final days, and that promised outpouring means (see below) we can know and understand His will, IF we will posture ourselves to hear His voice and not harden our hearts to His truth.

Be found in Him. That is where His blessing will overtake you, unimpeded by circumstances in the world. And to that point, a word of encouragement for us all: Troubles on earth do not delay God moving and/or accomplishing His purposes in the world, or in your life. The prophet Haggai actually confirms to us that the troubling/shaking work prior to His return IS His purpose (Hag 2). It will result in the greatest harvest of souls, ever. And we get to participate!

We are here to glorify Him in these days.

Rest in that. It is the good place.
Happy Passover. Happy Easter.

Ephesians 5:8-21
8 For you were once darkness, but now you are light in the Lord. Walk as children of light 9 (for the fruit of the Spirit is in all goodness, righteousness, and truth),
10 finding out what is acceptable to the Lord.
11 And have no fellowship with the unfruitful works of darkness, but rather expose them.
12 For it is shameful even to speak of those things which are done by them in secret.
13 But all things that are exposed are made manifest by the light, for whatever makes manifest is light.
14 Therefore He says:
“Awake, you who sleep,
Arise from the dead,
And Christ will give you light.”
Walk in Wisdom
15 See then that you walk circumspectly, not as fools but as wise,
16 redeeming the time, because the days are evil.
17 Therefore do not be unwise, but understand what the will of the Lord is.
18 And do not be drunk with wine, in which is dissipation; but be filled with the Spirit,
19 speaking to one another in psalms and hymns and spiritual songs, singing and making melody in your heart to the Lord,
20 giving thanks always for all things to God the Father in the name of our Lord Jesus Christ,
21 submitting to one another in the fear of God.

I am a believer in Jesus - that He is the One and Only Messiah of the world. I believe the Bible is the perfect and complete Word of God, and that God is absolutely competent and capable of keeping His Word perfect, undefiled, and uncorrupted. Jesus was born Jewish. So was I. He lived a perfect life, and is worshiped. I live an imperfect life, and I worship Him.
View all posts by ez3728 →
This entry was posted in Anointing, Apocalypse, Blessed, Blessing, End Times Related, Everything, Fear of the Lord, Hearing God, Holy Spirit, Israel, Jesus, New Testament, Openness, Peace, Personal Relationship, Prayer, Prophecy, Timing, Tribulation, Understanding & Knowing God, Word Of God. Bookmark the permalink.